It’s officially the last weekend before school starts up again. Hard to believe–in some ways it feels like I was just in Ecuador yesterday, and in others, it feels like it was a lifetime ago. It’s been a short summer, in the way summers always are, but when I stop to think of how much I’ve done? It’s been the longest one yet.

I spent part of this summer, like most before it, travelling to the US. Saw some new places, saw some old friends–living out of a suitcase for five weeks is about as appealing as it sounds, but it was so worth it, and I’d do it all again.

I was only in Boston for a few days, but I’m having a really hard time not just making this whole post about the latest city to steal my heart. What a town. I’ve wanted to visit Boston since I was about 12 years old, and I think I’ve always felt like I sort of belonged there, in a weird way–something to do with growing up around Irish folk songs and fishing communities on the East coast, probably. It was everything I imagined it would be and more, and I’d go back in a heartbeat–and I know I will, with everything in me. It’s one of those cities where I just know that there might not ever be a “last time” I go there.

Fenway Park deserves a post all on its own. I dreamt about that moment: walking out under the grandstand and seeing the park, the diamond, the Monster, all for the first time. The sun on my face. The Sox in their home jerseys. Dropkick Murphys over the PA.

The Sox swept that series–a highlight in a season with a lot of lows so far–but even if they’d lost every game, that was one of the best weeks of my life. 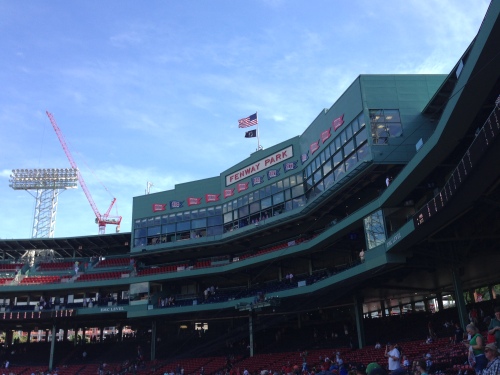 Boston was followed by a week and a half in Baltimore, with a weekend in Philly thrown in for the NHL draft. I explored Baltimore a little more than I have in the past–I walked around downtown (in the rain), and went to the National Aquarium, which, well. Best aquarium EVER, guys. If you go to Baltimore, you gotta go. There’s still a lot I haven’t done in Baltimore, but I’ll just keep checking off a little more every time.

The draft was great–I didn’t even leave the first round angry! All things considered, it was a great time spent in Philadelphia, and if you know me, well, that’s saying a lot. I was so thrilled to see five of our Oil Kings picked, especially because I was really only expecting three. There’s always a sense of pride that comes with seeing these kids, that you’ve watched and rooted for from such a young age, have their dreams come true.

Philly also came with more baseball–two games against the Braves, with the biggest Braves fan I know. I’ve said a lot of things about Philly and I’m not necessarily going to take any of them back, but I will say this: that ballpark’s got a pretty nice view.

It’s been a long summer, but I have to say that I’m excited to buckle down and get back to work, get back to school and take advantage of the opportunities that have been given to me. I’m feeling an outburst of gratitude and creativity these days, and I can’t wait to put it to good use.

It should be a busy Fall–I’m ready for it.

(P.S. — This is as good a place as any to mention that I’m working on some new writing projects, one of which is up and running over at Marvel Made Me Do It, a blog where I talk about comics and comic-related things!)